Pandalus borealis is a species of shrimp found in cold parts of the Atlantic and Pacific Oceans. In the Northwest Atlantic, they occur as far south as the Gulf of Maine and extend Northward to the Davis Strait. Distribution is continuous through east Greenland and the Northeast Atlantic, including the Norwegian, Barents and North Seas.

This prawn has been widely fished since the early 1900s in Norway, and later on in other countries, following its discovery by Norwegian Researcher John Hjort. They live at depths of between 10 and 500 m, usually on soft muddy bottoms, in waters between -2°C and 12°C. Individuals can reach a length of 120 mm.

Breathing through Gills, all crustaceans have a hard outer shell and jointed legs. Pale Scarlet, growing up to 16cm long, the northern shrimp (as the Pandalus Borealis is known) has a log antennae and a pair of large compound eyes. The species is a protandric hermaphrodite, meaning it’s a male until it spawns for the first time at about three years old, then changes sex to a female. 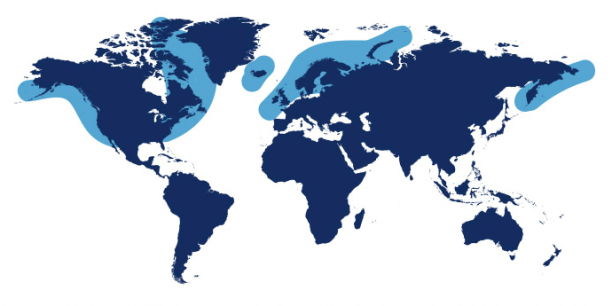